Henry was given a birthday party two weeks ago because his birthday falls so close to the holidays. However, we made sure to leave up the birthday banner and celebrate today. 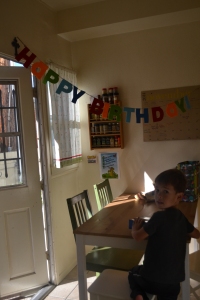 He had a small gift waiting for him 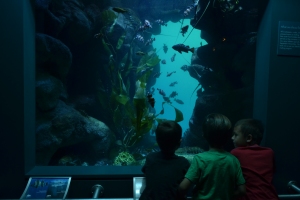 and his cousin came over to go to the aquarium. I really think these boys could have stayed at this one tank watching the giant lobsters and eels all day. They had sound effects and stories galore about these creatures. 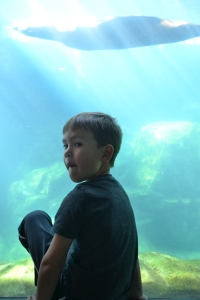 Henry has grown leaps and bounds this last year. He learned how to ride a bike, joined a soccer team, and outgrew his naps on most days. Usually at night he falls asleep fast and hard, with snoring because he is so active. Jich’s nickname “Putter” still fits him. He has that restless energy of my Jich and the wandering attention of his father. My latest passion is to watch his eyes light up when he makes connections between books and real life. In the book we are reading there is a girl named Charlotte, just like in his class, but he calls her Charlie. He is currently growing his back molars in and you would never guess. He is as happy as a clam most days. He is also an adoring big brother to Olivine and an admiring younger brother to Paul. Last night he turned his bottom bunk into a castle for his princess Olivine and tonight he dragged all the blankets out to cover the floor for an imaginary picnic. I can’t get enough of his big hugs, sweet smile, and silly laugh. 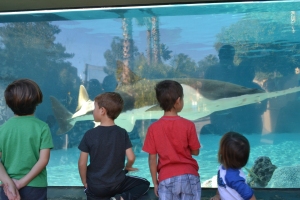