as best we can with heavy hearts, but children make it easier to go through this grieving with their daily routines 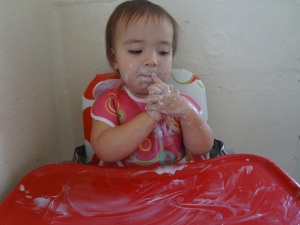 and opening ourselves up to articulate answers to questions only little ones imagine in relation to death.

Their affection for one another reminds me that as one page ends, another begins 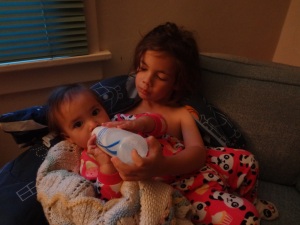 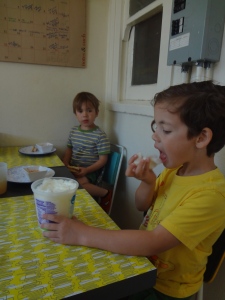 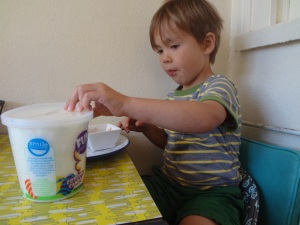 as the boys enjoy treats he gave them last week, wear boots he picked out, dress in police costumes because he was their hero, and sing songs made up on the spot about him.

Seconds later they have moved on. Tonight it was the game of making a “baby bunk bed” and she played right along with them.

After Paul wrote this kind- three sentence apology letter to his teacher about the pony he took in secret. We are putting one foot in front of the other and stepping bravely forward.

is one of the many phrases I have heard repeated over the last couple days to describe my Ji’chan.

He was the one I can say without a doubt found his true love. 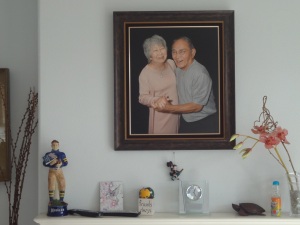 He grew up in the Central Valley, joined the military and survived the Japanese Internment of World War II. I learned these stories first hand, almost 22 years ago

when I sat down in my backyard to interview him for a school project. I had no idea then, the stories that would be revealed.

He was the one who continued on after my Ba’chan passed away.

Proving us all wrong. Although his heart ached every day for her, he found joy in life and made sure to take care of those around him.

He was the one I named my first born after. Doubtless Joe or I could find a more worthy honor for our son.

He was the one who was few on words but great in action. He loved with such consistency, thoughtfulness, and fullness.

He was the one who went to his volunteer job last Thursday, like he has done for years, and after coming home, while taking a nap, departed in peace.

He will be missed by many. 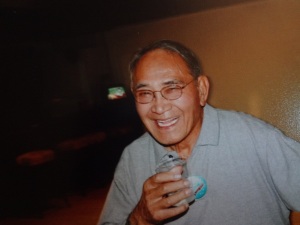 We are approaching finals for Joe, being generally busy, and discovering Paul has a growing interest in painting. 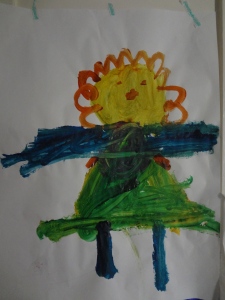 He also has a papa who when asked to make a ninja turtle sash to carry his sword, he can instantly have one created, and he will wear it all day long (it’s a sock and some felt, really!)

We gravitate toward one another so that as I cook dinner the kitchen becomes a lively sound of playing at the table.

Once in awhile I give in and we have a picnic dinner on the kitchen floor.

The boys like the idea of eating with baby, rather than having her be in a chair.

She is endlessly entertaining with her silliness like “hey, check out my legs”

or the casual “I can stand now” pose that passes before I can snag a clear photo.

She knows she is doll 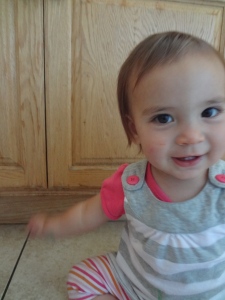 and will make raspberry sounds on her tummy which cracks herself up.

She will also climb onto the same chair as her brothers did at her age and jibber jabber to no one in particular, but as soon as  a stranger or neighbor appears and talks back to her, she clams up.

She has marker fingers

and a look that forces me to put down the camera and embrace her before these days slip away. 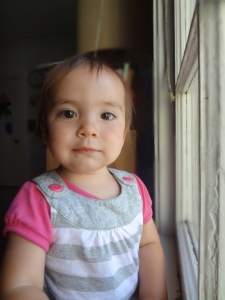 I am signing off for the next few days because this little pumpkin and I are headed to Portland.

Today was a chance to hang out with cousin- Miss Fiona and enjoy an afternoon of busy babies (in tribute to one of Olivine’s favorite picture books these days- Busy Bunnies).

They shared food and splashed in the water.

stood on the step and made faces. 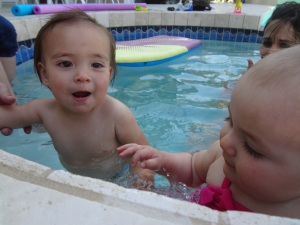 slurped up some dessert.

from the safety of the giant trampoline 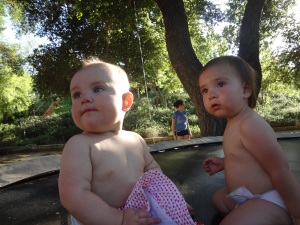 until there was a joy ride around the backyard

a bit too fast for momma to watch.

pointed at the kitty with mini legs.

and everyone fell asleep on the car ride home from having too much fun.

at India’s afternoon birthday bash seen in the flushed cheeks of little ones.

in the jumpy house, so they used towels for protection. 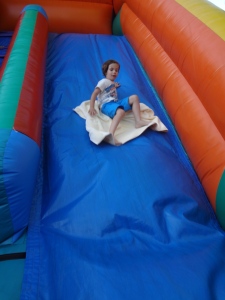 enough to go barefoot in the grass.

in the shade, out of direct sunlight, and relieved when the sun passes to the backside of the house.

We hung out at Ji’chan’s this morning

because Jich always has plenty of snacks

We sat on the porch for awhile

until there was a gathering of 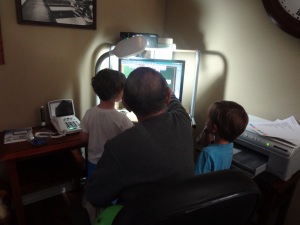 game playing on the computer together.

Do I blame Paul for continuing to ask when he can sleep over at Jich’s? It’s too much fun, always.

He’s got an endless amount of expression. Here’s his tough guy at the bus stop, wearing a backpack like his brother (even though he doesn’t go to school yet), as he points out every motorcycle that zooms by.

So the challenge this week was closets but I had already done my closet recently. I decided to find more shelves (specifically in the kitchen).
We have managed in our busy lives to just stuff certain shelves. It’s the kind of shelf that feels like Jenga, one wrong move and it might all just topple out-so be quick in grabbing what you need. 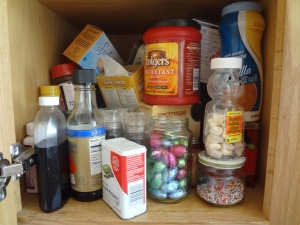 I pulled everything out, threw some stuff out, cleaned, and mainly organized. Now you can take as long as you need to grab something.

The shelf above was less messy, rather just needed cleaning, and that feels more tidy.

The white basket came from this cupboard where we had an overstock of “baby stuff.” This shelf signifies also the awareness that my little girl is needing less of this baby stuff. Unlike previous years where it got moved to a closet for saving, this time I tossed most of the stuff knowing I am not having anymore babies.

Wow, I have space that is empty and that feels very satisfying.

A little room to grow.

A Friday ritual. A single photo – no words – capturing a moment from the week. A simple, special, extraordinary moment. A moment I want to pause, savor and remember.

Poem in Your Pocket

Today is the celebration of poetry with the idea that you carry a poem around in your pocket to share with others and Paul’s school participated. 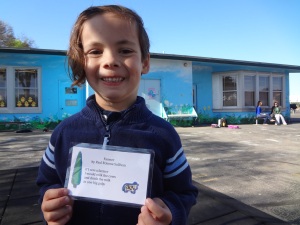 As part of his homework he wrote a poem last night.I did a mini lesson on poetry and he actually understands a lot. So he came up with this poem all on his own. He then wrote it down, and then I helped him type it up. Papa printed it on a card and we added stickers, before he laminated it for his pocket.

Did we also mention how proud we are of his student of the month award. Go Paul!

He is our superstar poet in residence. We feel so blessed to have him in our home.