We were at the mall with my mom who took the kids to “Build a Bear.” 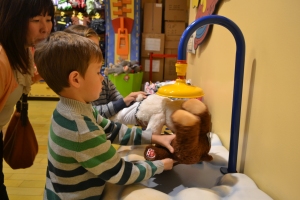 They all bought bears. Paul dressed his in a football jersey while Henry chose a Batman costume. Olivine has a sparkly bear with the frozen song inside.

We saw a Claire’s and went in…..seemed perfect with her middle name being Clare. This was not the type of decision I wanted to over analyze. I knew it would happen but I am never at the mall. I asked our pediatrician when she was an infant, but she doesn’t pierce ears. Joe and I had talked about it but never in any serious way.

She was nervous and excited and her brothers were sure she would cry. But with a lollipop as a decoy, she only frowned. No kicking, yanking, screaming, or even one tear. The girls in the shop were shocked.

She described it as a “shot in my ears.” The ladies pierced her ears in tandem with her birthstone. Two minutes later she was looking in the mirror with wide eyes and a big smile.

She even had a bag to carry with bragging rights. She has been showing them off. We are cleaning them three times a day and so far, she is not having any issues.