Lately we are ushering in a new tradition.

Not all meals, but as many as possible, will be eaten “family style.”

This comes after watching the boys at the child development center, talking about the benefits with my sister Rebecca, and internally wrestling with this idea of wanting to teach my children through giving them choice (just like I do in my classroom).

Before eating- the boys helped set out all the food, served themselves, and poured their own milk.

During the meal- they insisted on doing it themselves and serving the portions they thought edible (which turns out to be more then they would eat had I filled up their plate).

After the meal- no complaining, lots of the food was gone, and I really only had to prep the food into the containers and let go of the part that habitually serves them their food. 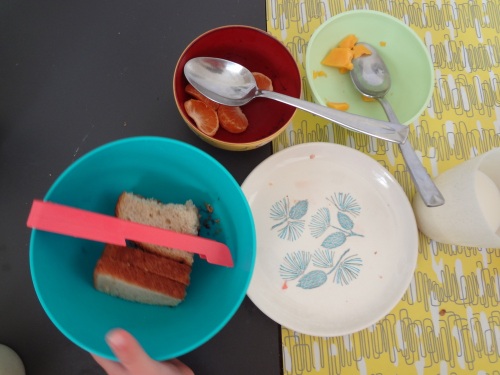 At the end of the meal Paul noticed that his watermelon seed looked like a bumblebee because it had stripes. Once again, I am stopped in my own business to see the world throught the eyes of a four year old, which can be creative and beautiful.