This is the name of Paul’s baseball team. Today was our shopping day and you could see him just floating on clouds as we tried on pants and cleats. We came home and all he wanted was to wear all the new stuff.

He wanted to just stand out back and swing his bat.

I caught him checking out his shoes several times.

We eventually convinced him to take it all of, and go over to the park for some catch and batting practice. 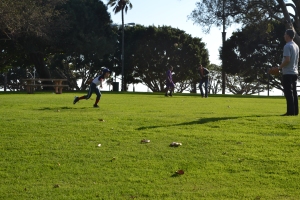 Maybe even some vinegar and baking soda rockets.

Tomorrow is February first. There is one little girl who is only thinking about her birthday coming up. She really thinks it is the whole month, that she is having a party, and she keeps asking for an ipod (I swear). While I am kind of looking forward to Chinese New Year and hanging out with SF friends (J & D). But Paul is obsessed with practice starting. So tonight (super cute) I caught him calculating the hours he has left until his first practice, next Saturday.

His math checks out. He has about 168 hours until then! We will see if he can survive.

One response to “River Cats”