A kid and parent kickball game was how Paul’s first grade wrapped up the year. 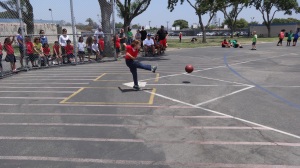 It wasn’t kids versus parents. It was more of the class being split in half and the parents kicking after their kids. 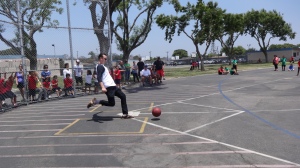 Joe was the pitcher for his team

while we sat on the sidelines and cheered for everyone. 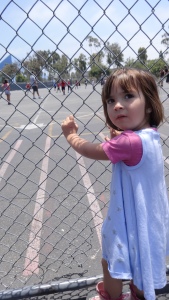 There was incredible parent participation and my favorite part was at the end of the game, as the bell was about to ring, his teacher lined them up one last time and referred to them as second graders. It made my heart twinge a little with sadness and excitement.
I also really love this classmate of Paul’s, they look like they could be twins. Except when he looks at the photo, he thinks she looks like me. Either way, missing teeth plus curly hair equals cute!